On Jan. 7, 2014, I gave a talk at Marin School of the Arts called “Art is Rewiring the Human Race.”  I asked the photography, film, and painting high school students to write questions throughout my talk to support further exploration of the topic – The practice of art as a tool to help human evolution grow from seeing “Differences as Dangerous” to “Differences as Opportunity.”  I was moved by the students questions, which stimulated deep thought as I wrote responses.  We watched two of my videos, A Call to End War and The Redwood Singing Tree of Biodiversity, which some of their questions refer to. 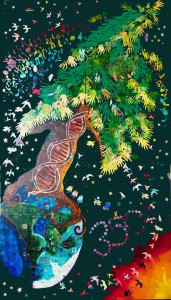 Why did you think of making the video “A Call for the End of War”?

There was a contest by the Pachamama Alliance called “Positive Futures.” When I saw the Urban Apache Crew dancing in San Rafael, I filmed them because they were so inspiring. Reviewing the footage, I knew the dancers were modeling the kind of positive future I want – the opposite of war. The video unfolded from there.

Why do you say a prayer just for sons in the End of War video?

Most wars are planned and fought by male soldiers. This includes the drug wars in our country. Much of the aggression on our planet is carried out by men. It is masculinity that is serving itself, instead of the women, children and life. The latter is what I call “Sacred Masculinity.” I am aware that women and children are the victims of war. I absolutely agree that women and LGTB people are part of the new wiring. In fact, many are leading the way. “Divine Femininity” and “Sacred Masculinity” are needed on our planet to balance the huge amount of aggression that is going on.

Is this a realistic goal – to make a world that is based on respect and cooperation instead of greed and manipulation?

When I make collaborative murals, I see the joy and cooperation that is possible. Over and over, I witness groups of people creating something more powerful than they could by themselves. I see people working out their conflicts with respect. As former Army Captain, Paul Chappell, points out in his book “The End of War,” people thought it was unrealistic for slavery to be abolished or for women to vote. These things changed. I probably won’t see a world that works for all in my lifetime, but every cell of my body is committed to helping create a safe world for “all of the children of all the species for all of time.” That’s the standard biomimicry architect William McDonough has set. Pretty high, huh? I believe it is worth working for.

Making one painting is good, but does it actually influence change?

No, on-going social contact influences change. Making a painting is one step among many that are needed.

Where do imagination and improvisation relate and have similarity?

They are intertwined. Imagination is the flow of vision and ideas. Improvisation is the act of bringing ideas into physical form. Our country had the vision of “Liberty and Justice for All.” We’ve been improvising ever since. We have a vast expanse of land with many nationalities creating together. As a painter, when I bring my ideas into physical form and put paint to canvas, the painting starts feeding me new ideas. Reality is always feeding imagination, which, in turns, gives new forms to reality. More and more people are talking about a world that works for all. Novato High School, where the culture is one of acceptance and appreciation, reflects that. You will take that out into the work world, and into the amazing unknown future that will demand imagination and improvisation. 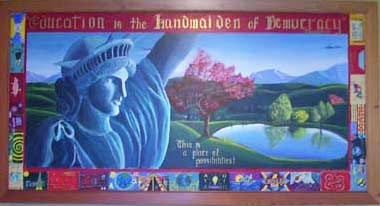 How do all these kids cooperate, collaborate and brainstorm together as one?

I have found a deep hunger in the people I work with to bring their individual creativity in service of a larger community of purpose. I hold the vision that everyone has a valuable contribution to make, and, guess what, they do! Synergy happens, and what we create is more amazing than we dreamed of. Here is a video of the most recent Singing Tree I made in Sarajevo, Bosnia-Herzegovina in June, 2014, which demonstrates what I’m talking about. The young people who created the mural had families from different religions who had fought each other in a civil war in 1990’s. You can watch the video by clicking this link: The Sarajevo Singing Tree of Renewed Togetherness

It is good to think this way (ending war, unity through creativity), but is it realistic? How is change actually made? People are too optimistic.

Change is mysterious and big. One way it begins is by having a vision that a different possibility exists. ”Without vision, the people perish.” Again, I ask you to think about when slavery was legal in this country. No one thought it could change. You were arrested or killed for trying to change it. People self-organized to free slaves, to tell the story that all people are created equal on a new level (not just white men), to fight to change laws. Harriet Tubman saw each of the people she helped to escape as free souls already. She never lost a single person in the Underground Railroad. Change happened from the ground up, like a tree growing. The problems of our times seem overwhelming and huge, like a blue whale that takes 10 miles to turn 180 degrees. Think of our messy, heart-breaking, gridlocked situation like a school of sardines, which is as big as a blue whale. When 8% of the school starts to go in a different direction, the whole school follows. (Metaphor from Clayton Mueller of the Cree Nation). If we keep working on our own problems, increasing our mastery, autonomy, and higher purpose; and connect with others who are doing the same, something powerful will happen. On the issue of optimism, I hold the vision of a world that works for all people and all species with great conviction. I doubt if it will happen in my lifetime. My conviction is not dependent on the outcome. Frederick Douglass said in 1888 “Do not be overwhelmed by the magnitude of the problem, nor the power of the opposition,” in regard to women’s suffrage. He did not see women get the right to vote in his lifetime. This did not disway his efforts. In 1913, when women could finally vote in our nation, his devotion to the vision of “Liberty and Justice for All” was finally fruitful. In other words, we don’t know when change will actually happens. We know what we are committed to and work for that.

How can we spread this message?

First, by living it. Honoring our gifts. Developing our talents. Looking for the gifts of others, instead of focusing on their flaws. Bravely learning from our differences, so we become wiser and deeper. Not taking anything for granted, especially the people and planet that give us life. Second, using our creativity to spread the message in all we do. Photograph it. Speak it. Dance it. Perform it. Video it. Paint it. Sing it. Write it. Research it. Measure it. Evaluate it. Share it. Get together with our friends and figure out how to distribute the message. I’m here to help as well, as are your teachers. 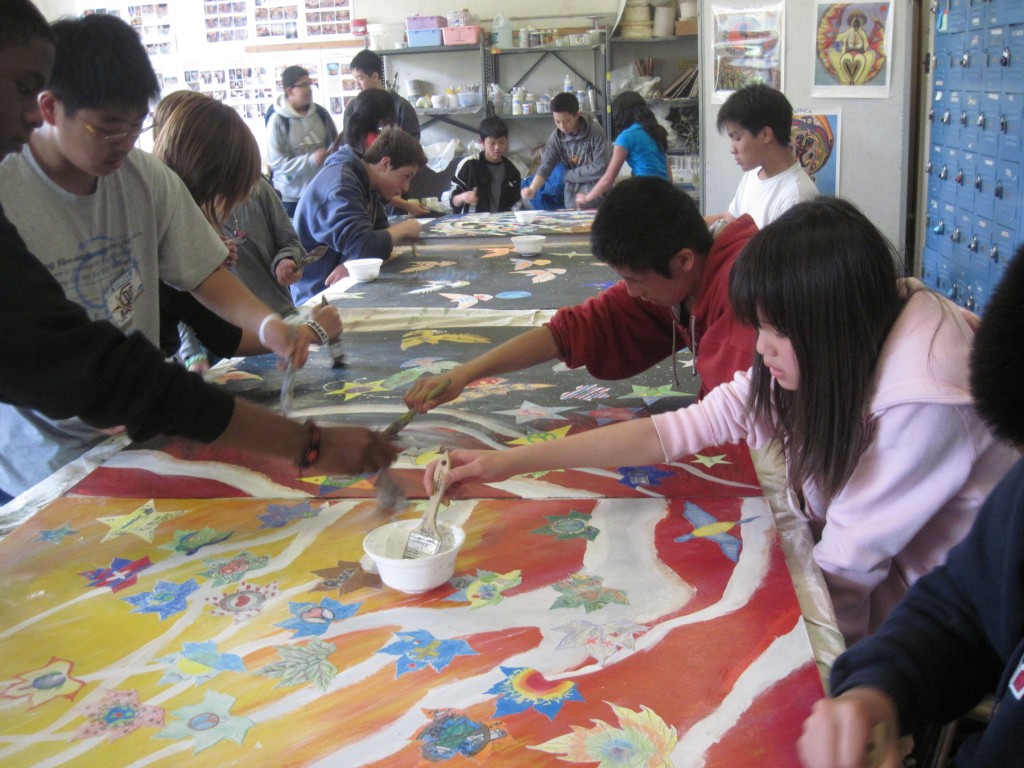 How do we make opportunities like this available to more people?

By first listening to what people are concerned about and coming up with driving questions to create around. How can we make a high school where everyone loves learning and knows they are important? How can we make a town where everyone loves their work? How can we be free from addiction? How can we maximize the use and sharing of scarce water? Then we envision projects and invite people to join. We can make a school wide mural. We can make an intergenerational mural with NHS students and the people in Novato’s Nursing homes or with the grandparents of the students in Novato High. We can make a mural with students in another country. We can make collaborative plays and musicals in front of the mural that tells the stories unlocked by the mural creation. Our imagination is the limit…..

How do I start to make these changes? What do I do to help?

You have already started by asking these questions. I’ll also repeat what I said in my talk. Seek your own spark and the spark in everyone you meet. Put those sparks together and make a big, beautiful light in the darkness of fear and hatred. Know that we are here together on a rare and precious planet that has life, while there is no life around us for billions of miles. Our differences are here to learn from and to bring us joy. Thank you for asking such important questions.

Your cart is empty
Visit The Shop